1. Introduction
The Magnetic Extensometer system is a geotechnical tool used to measure settlement and heave of soils and rock within foundations and embankments. The instrument consists of permanently polarised ferrous magnets, sealed into two types of settlement targets known as spider and plate magnets. Readings are then taken using a magnetic probe connected to a measuring tape, which is lowered down the plastic access tube and detects the magnetic field of the settlement targets.
This article outlines some of the issues that may occur when using a Magnetic Probe Extensometer, why they occur and what will need to be done if these issues are apparent. 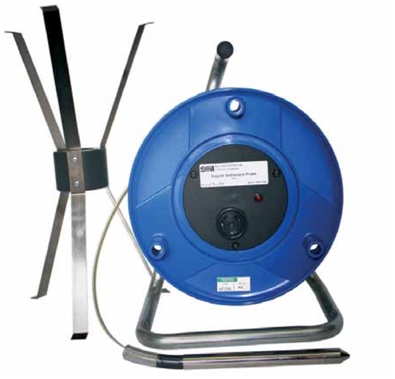 2. The unit is producing a continuous beep
If once the unit is lowered into the borehole the buzzer is continuously buzzing, you may have experienced a cable break or damage to the cable. The water within the borehole is then shorting the circuit and causing the continuous buzz. This could be caused by 'nicking' the tape on a sharp object or if the tape is stretched causing the tape to split.

If you are experiencing such symptoms we would recommend visually inspecting the tape and replace the tape if a fault can be identified or returning the instrument to Soil Instruments for further inspection.

3. The buzzer is not reacting to the settlement magnets
If the buzzer and/or lamp are not activating when passing the probe through the target magnets magnetic field there is a strong possibility that the battery within the reel hub has dropped below a sufficient voltage to power the buzzer and will need replacing. To do so you will need to unscrew the three screws on the from of the hub, take care not to damage any of the wiring. Ensure you have a new ‘PP9’ 9V battery to hand. The battery is secured by a Velcro strip attached to the battery. Carefully withdraw the battery, remove the Velcro strip, attach it to the new battery and re-install. Carefully replace the faceplate ensuring that wires are not trapped and re-tighten the three fixing screws

Warning: We strongly recommend re attaching the supplied velcro strip to the new battery or ensuring that the battery is safely secured using a different adhesive. If the battery is not secured you will risk damaging other internal components when using.

4. Buzzer reacting multiple times to one magnet
If you are experiencing multiple readings at each magnet level, this is usually caused by the probe moving in and out of the magnets magnetic field, there are many reasons for this occurring. Firstly this could be resultant from the size of the casing you are using, for example if you are using our larger inclinometer casing with a slimline probe, the distance between the magnets could be too large. This sensation could also be caused by ageing magnets and the condition the magnets are installed in, for example, if the magnets are installed in a saline area this can effect the life expectancy of the magnets. Finally this could also be caused if you are not using a centraliser, therefore allowing the magnetic probe to sway in and out of the magnets magnetic field. If you require a centraliser for our Magnetic Probe Extensometer casing please contact Soil Instruments sales department.